With their allusions to antiquity and corroding human forms, Stephen De Staebler’s iconic sculptures (1933-2011) powerfully activate the secluded grounds of the Villa Montalvo Arts Center, an Italianate villa and public park nestled into the base of the Santa Cruz Mountains in Saratoga. Whether stationed on the villa’s lawns, its great veranda, or in the beckoning gardens, the settings for De Staebler’s five life-sized bronze sculptures are perfect.

Envisioning Montalvo as a refuge, resource, and showcase for the arts, James Phelan (1861-1930), philanthropist, three-time major of San Francisco, and California’s first popularly elected U.S. Senator deeded this property to the state. This idyllic environment continues to flourish, and 103 years after its creation, Villa Montalvo still inspires reverie and the deep contemplation that both he and De Staebler envisioned. The show, fittingly titled Metaphoric States, was organized by the Dolby Chadwick Gallery, which represents the artist’s estate.

The cracking, elongated bronze figures, evocative of Grecian and Egyptian art, Giacometti and Manuel Neri, hover precariously above or stride silently beside us, implicating the ravages of time. Made between 1982 and 2010, one year before De Staebler’s death, these heartfelt notched and pummeled figures embody the impulses and gestures of his processes. They appear to be works in progress, unfinished, or perhaps in the slow process of decay. But as a collective, the impression is one of noble poignancy. 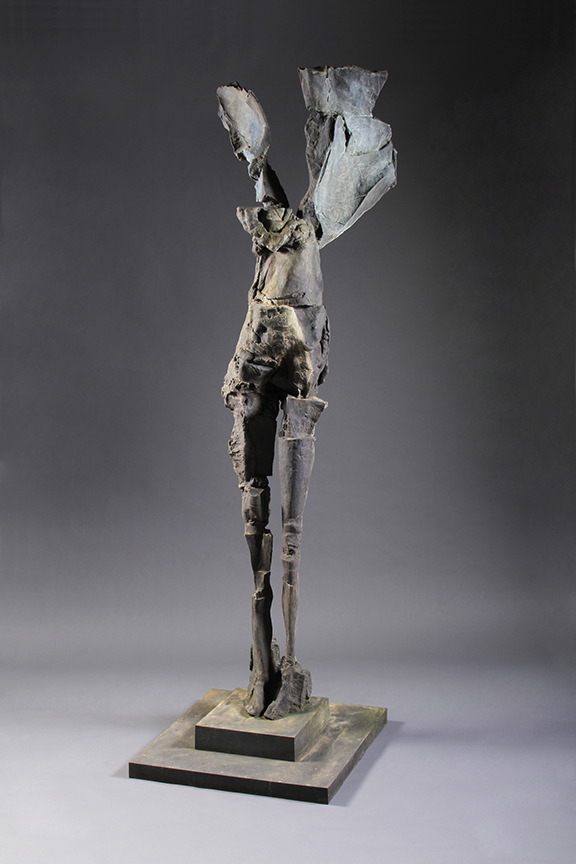 Throughout a long and respected career, which began with clay sculpture, De Staebler’s central concern was the impermanence of life. Whether working in clay or metal, he pushed and pulled his forms between figuration and abstraction, exploring the contradictions between surface and mass, the smooth and the corroded, and the eternal tension between spiritual aspirations and the sagging fault lines of our mortal experience.

In the early 1980’s, after injuries impaired his ability to sustain the physical demands of clay, he explored other approaches. One involved shattering a column of clay and saving the fragments. Understanding that every particle of matter is charged with life, he made molds of those fragments, followed by wax casts of the molds, which were later fashioned into the emotionally charged bronze figure fragments we see here. “Bronze gave me a new energy,” De Staebler once remarked. “It gave me more control. But the bronze pieces are connected to the earlier [clay] work. Some are barely touching the ground. They still feel as though they’ve been broken away or sheared off from nature.” And it’s these teetering or sprouting figures that populate the grounds at Montalvo

The tallest and most prominent piece on the grounds is the valiant, arching Winged Figure Ascending, AP (2010). It’s built of black bronze chunks stacked into wobbling, barely stable legs, out of which emerges a forward-thrusting torso with flapping “wings.” This earth-bound “angel” epitomizes, as well as anything the artist created, his abiding connection to the spiritual and our shared human condition. In the face of disease, war, and the dark dynamics of political power, the figure speaks of what De Staebler called “a dark optimism in the midst of pessimism.”

“Metaphoric States: Five Bronze Works by Stephen De Staebler” @ Montalvo Arts Center through October 1, 2015.
About the Author:
Julia Couzens is a Sacramento-based artist and writer whose work has been widely shown, most recently at the di Rosa Preserve.  Her drawings and hybrid objects are in museum and public collections throughout the U.S.  These include the Achenbach Foundation for Graphic Arts; Berkeley Art Museum; Oakland Museum; Weatherspoon Art Gallery, University of North Carolina; and Yale University.  She lives and works on Merritt Island in the Sacramento River delta.
159
Read Original Article
DOLBY CHADWICK GALLERY
210 Post Street, Suite 205
San Francisco, CA 94108