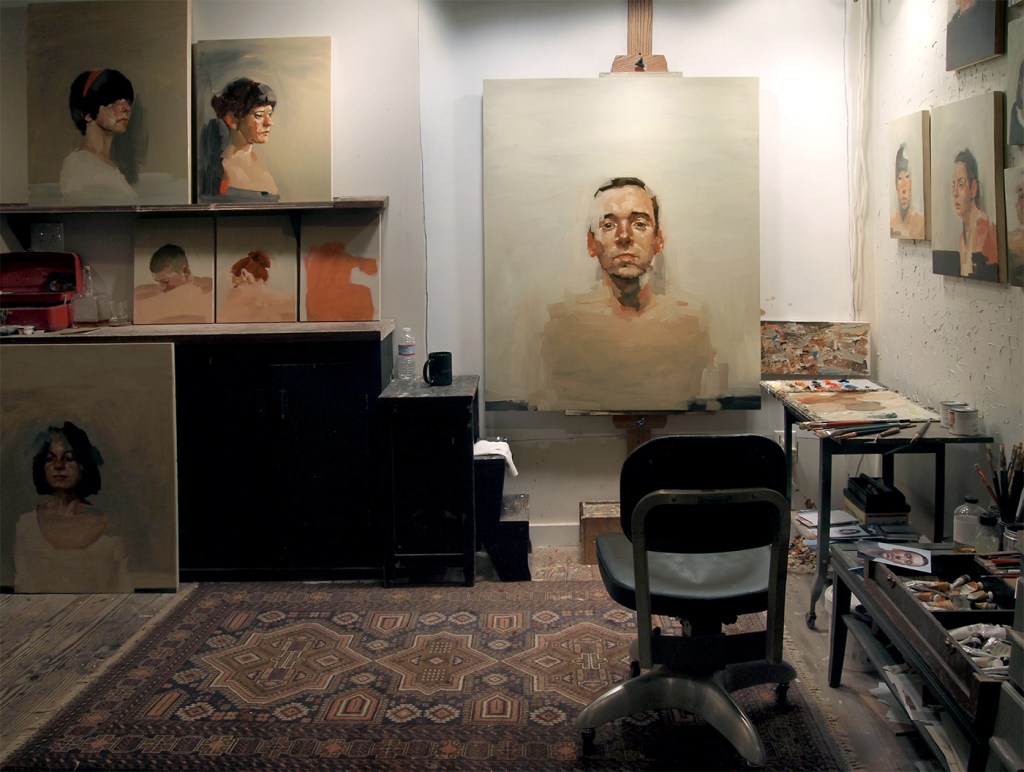 Photos are a great way to retain most of our past memories, but to use them as a reference for painting is quite unique. Sure, painters use people and other objects to create their work, but using pictures is something that is unheard of. By using photographs and frozen film, an artist can take a portion of someone else’s work and then produce an entirely different piece with an entirely different purpose. Paintings that bring about an emotional response through the various techniques used are works that were created by an extremely talented individual. Kai Samuels-Davis, an American-based oil painter, is the extremely talented individual who makes these authentic and distorted paintings, with amazing details, that represents a universal language that we can all relate to.

Samuels-Davis is originally from New York, but he has since moved to Los Angeles to indulge in his film studies. At the Art Center College of Design, he earned a graduate degree in fine art and video. This may explain why he usually incorporates some sort of film element into the majority of his oil paintings. Studying film and its properties has given the painter several tools that has helped him create an emotional bond between the paintings and his audience. The inspirations that the artist gains from the cinematic world are put into his paintings and give the audience a sense of desire and motivation. Whether the painting is showing the viewers a life-like individual or wilted flowers, the artist somehow makes the beautiful paintings look so effortless.

Samuels-Davis pushes the boundaries of the art by creating realistic-looking images. His effortless paintings are the reason that so many people are drawn to his work. When glancing at the canvas, it looks as if someone just used a paintbrush to gently stroke the surface. The brushstrokes are shown with extreme detail, which gives the painting a natural look. The brushstrokes, while crucial to his work, are not the only apparent factor for him when creating his art. Shading is something that is of extreme importance to painters, but Samuels-Davis takes it a step further. While the majority of painters use lines and borders to create objects and shapes, Samuels-Davis uses darker and lighter shading. The shades and brushstrokes of his work create more emotion that erupts from the painting and give us something to ponder.

Samuels-Davis’ oil paintings are an art that appeals to viewers by showing us a stop motion film depiction. Through images of fashion photography and episodes of silent films, the artist is able to show his viewers a combination of film and painting. He refers photographs of lifeless objects, as well as people, so that he has an idea of what he wants his finished product to resemble. With this, he can create an unfamiliar, yet exciting experience for his viewers. We, in turn, are drawn to the emotions that pour from these pictures and we are itching to know about the events surrounding the painting. By bringing together several arts and techniques, the painter is giving us something that is new to our taste buds, and I for one, really enjoy it.

Over the past year, the artist has been making his subjects with contorted faces. The Forgotten II, an oil painting he created last year, shows us a bearded man with blue eyes and he seems to be staring intently at something. The painting has a lot of layers of different shades and colors, which has brought me to think that this painting may be more than just a picture of a thinking man. In its previous installment, The Forgotten I, the same elements that were placed in the sequel were also placed in its original. In the first one, we are painted the picture of a woman, similar to the man, who is troubled by something, hence the way her eyes are drawn. These two images express rather a dark mood.

The Forgotten I and The Forgotten II are the artist’s latest paintings. It’s a mystery to why he would contort the images in any way, but I feel that they are pieces that are meant to give to us something different than his hyper realistic paintings. While these paintings are amazingly detailed, my personal preference has to be his authentic-looking paintings. In The Other Field I, we are shown a person laying down in an area that has nothing present, at least from the audience’s perspective. It’s a simple painting, but the viewer is curious as to what is in this world, and why is this single person laying down. It intrigues us to the point where we want to know more about everything that’s going on here.
235
Read Original Article
DOLBY CHADWICK GALLERY
210 Post Street, Suite 205
San Francisco, CA 94108