Las Vegas Sun News | Mayme Kratz: Chromaticity brings the warmth of the southwest to heart of the Springs Preserve

Spiraling up through the center of the Big Springs Gallery at the Springs Preserve, Stephen Hendee's Thermal defines the heart of Desert Chromaticity. The crystalline column of light extends dramatically from the floor right up to the arc of light fixtures hanging from the ceiling above. Golden yellows emanate from the base of the monolith, softening warmly as they skim the rich hardwood floors. Moving up the column, yellow shifts to orange. Just as the light turns a deep magenta, the form intersects the dark shimmering metal of a suspended architectural plane. Cool tones ricochet across the metallic surface, creating a purpley-pink haze along the ceiling of the gallery. Contained within Thermal is the full spectrum of a desert sunset.

A Vegas-based sculptor and installation artist, Hendee knows from Mojave twilights. He's just one of a handful of artists assembled by Springs Preserve curator Mike Spiewak, for whom the desert Southwest is home. Inspired by its singularity, Spiewak sought artists whose work distills the intense experience of color in the barren Southwest.

Singular doesn't even begin to describe the quality of desert chroma. Take a walk into the wilds at high noon, and the whole world is blanched and monochrome. The landscape shifts in subtle brown and gray, and textures heighten as a tool for distinguishing distance and value. A bit of quartz tinted by reflected blue sky or a sprinkling of yellow wildflowers absolutely quench the eyes. Textures recede at sunrise and sunset with the arrival of nature's complimentary light show.

In this vein, Mayme Kratz's layered paintings of resin and natural materials galvanize an organic encounter with color. 12 Knots consists of 12 thick square pieces—ranging from orange to yellow to green—embedded with dried grasses swirling like birds' nests. Materiality diminishes as lines of grass graphically transform, interchangeable with fine linear drawings hidden deep within the resin. The color is muted and distant. The sensation is that of a suspended moment in a fragile ecosystem.

Desert chromatics of a more man-made variety punctuate the show. A netting of freeways criss-cross the Southwest, and for most, the highway and the desert are inseparable. Mashing up digital and chemical photographic techniques, Sam Davis' Queen and 8 deftly capture the sun-saturated skies of the wide-open road. Vivid anonymous signage shimmers like a mirage at the edge of vision, dwarfed by a sky so blue it makes your heart hurt. The haunting Spyshot 2 is a memory play in muted tones captured with a German Minox spy camera. Inversely, a kitchen-sink developing process results in dreamy streaks of primary yellow/red/blues desperately trying to re-enter a fleeting sepia thought.

Kindred spirit Shawn Hummel taps a similar strain of desert sublime. Car culture, saturated hues and signage of the neon variety are shuffled effortlessly with fetish finish and formalism a la Clement Greenberg. Think of it as Chromaticity: The Vegas Edition. Hummel's stacked aluminum diptychs are orchestrated oppositionals: venusianbacksideVSteallustre or moltenhorizonVShotpearlmagenta. My favorite is brazilVSpearlblack. The top panel looks to be a blurred c-print of nighttime neon, but the flattened reds stain onto black in a slippery play of painterly finesse. The bottom panel is straight-up pearl onyx automotive paint on aluminum: sleek, scrumptious, and that most hated of art words—sexy. It's enough to make Marilyn Manson blush.

I could ramble about the quality of light in the desert. The pure intensity of wavelengths of light that generate the shocking kick in the pants that color can be. The lack of distinguishable hues in some places and the spectral onslaught in others. The nourishing psychology of a deep azure sky.

Instead, I'll simply recommend making your way to the Springs Preserve. Desert Chromaticity provides gentle lessons on how to quench thirsty desert eyes. 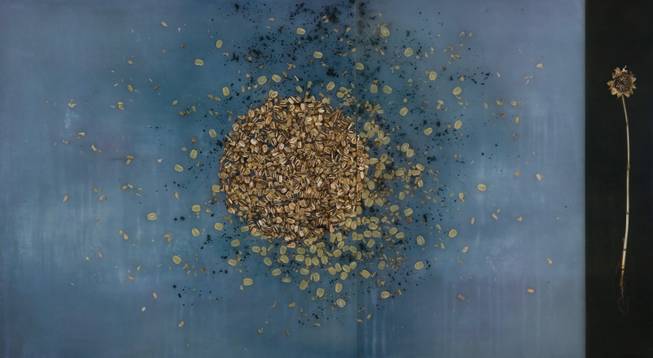